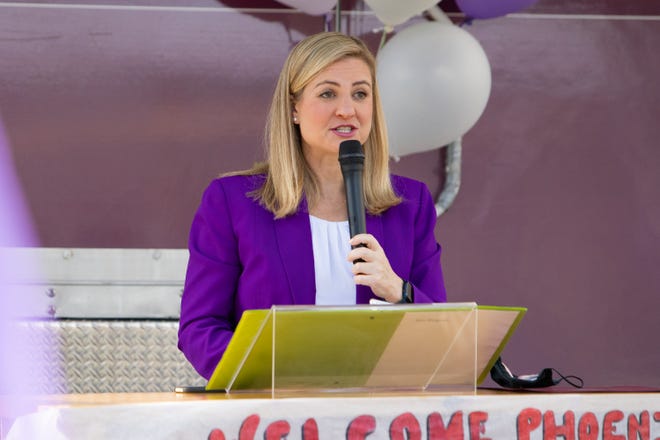 Gallego and Ansari plan to meet with local officials from around the world and discuss issues such as water conservation, access to electric vehicles, thermal protection and the role of cities in addressing climate change.

This year’s conference, known as COP26, is considered particularly important after a UN report found the world is trapped in some climate impacts, such as extreme heat and drought, that will only get worse for at least 30 years.

The participation of Gallego and Ansari underscores that the cities of Arizona have taken a leading role in addressing climate change and environmental problems, despite the fact that the state has offered few new ideas.

Earlier this month, Phoenix established one of the country’s first heat response and mitigation bureaus. Flagstaff, Phoenix, Tucson and Tempe all have climate action plans in place to set specific and measurable goals for reducing emissions.

Arizona does not have a current state-wide climate protection plan. The state was part of a regional climate initiative more than a decade ago, but it has largely been abandoned. Governor Doug Ducey will not attend the Glasgow conference, according to a spokesman.

Missing measures:Arizona was a leader in climate policy 15 years ago. What happened?

Almost 1,000 cities worldwide and more than 100 American cities are committed to a “Cities Race to Zero” campaign by C40 Cities, a network of cities around the world, to cause net zero emissions by 2050, according to Gallego.

“In many ways, this is the first global event of its kind where cities have a prominent role to play in solving the problem,” said Gallego. “We can make a major contribution to achieving global goals. The United Nations and C40 have been very focused on what cities can contribute to solutions. ”

C40 Cities, for which Gallego serves as North American vice chairman, seeks to share ideas and strategies on how to make cities more sustainable and encourages mayors to take an active role in tackling the climate crisis.

It represents “nearly 100 cities around the world with a population north of 700 million. And I am proud to say that we are responsible for more than a quarter of the world’s wealth. So we’re really important, ”said the new C40 chairman and London Mayor Sadiq Khan in an interview with the Washington Post this month.

The COP26 will offer both a private “blue zone” for diplomats to conduct international negotiations on climate change agreements and measures, as well as a public “green zone” for other elected officials, climate activists, academics and business leaders to exchange ideas.

“COP is very open to anyone who wants to come along,” said Ansari. “The goal of the conference for many years has been to be as open and accessible as possible, only because the climate crisis is an issue that affects everyone.”

Gallego and Ansari will take part in both green and blue zone events. Gallego plans to talk about several environmental initiatives in Phoenix, including a sidewalk cooling program that lowers surface temperatures by 10 to 12 degrees and the city’s thermal containment and mitigation bureau.

“Sometimes Phoenix is ​​known as the retiree community or other imprecise stereotypes,” Gallego said. “We are currently a global center for semiconductor investment. That will be the key to clean technology. And I want to tell this story around the world. ”

Gallego and Ansari have both been interested in the environment and climate change for a long time. Gallego got her bachelor’s degree in environmental science and has made climate change a part of her platform since applying for an elected office.

Ansari worked as a climate consultant for the United Nations and organized several climate summits herself before she was elected to the Phoenix City Council.

The city of Phoenix has allocated $ 2.8 million to climate change and environmental issues, the same amount for affordable housing and homelessness, and more than what the city has reserved for COVID-19 relief efforts. The money will fund 14 new jobs, including the Office of Heat Response and Mitigation, modeling and analyzing Phoenix’s air quality, planting additional trees, and other initiatives.

Climate in Phoenix:The city appoints a heat officer with the aim of reducing the risk of rising temperatures

“We have strong leaders in each of these cities who recognize the urgency of the climate crisis not only as a global problem, but also how it affects the lives and livelihoods of the people here at home,” said Ansari.

“I also think people recognize these threads. When I was campaigning, and now as a councilor, air pollution is one of the topics that comes up so often in my conversations and when residents raise concerns about us, ”she said.

Environmental justice will be a topic of conversation at COP26 for a number of reasons. Indigenous peoples have called for a stronger voice in the conference and future climate protection plans.

The rich countries have also pledged to provide poor countries with $ 100 billion annually in aid to combat climate change starting in 2020.

The pledge was made more than a decade ago and enshrined in the 2015 Paris Agreement, but countries have so far failed to achieve that goal.

COP26:Indigenous peoples are demanding more say and influence at the climate conference

Ansari said that environmental justice is important not only for low-income countries, but also for their constituents. It represents District 7, where some areas are 10 degrees warmer than others depending on how much concrete and asphalt there is in the area instead of trees and grass, which can lower temperatures.

“It’s very interesting … certain countries are facing environmental racism and dealing with the effects of the climate crisis in developed countries, but then we see it at the local level too,” she said.

While Ansari said she would like the state of Arizona to take a more active role in climate policy, in the absence of government leadership, cities are “absolutely critical”.

“In cities, you make a lot of decisions every day that have to do with traffic or new development projects,” said Ansari. “There are just so many decisions we make, if you have the climate and sustainability in mind, you can make better decisions and contain the problem.”

Zayna Syed is an environmental reporter for The Arizona Republic / azcentral. Follow her coverage on Twitter @zaynasyed_ and send tips or other story information to zayna.syed@arizonarepublic.com.