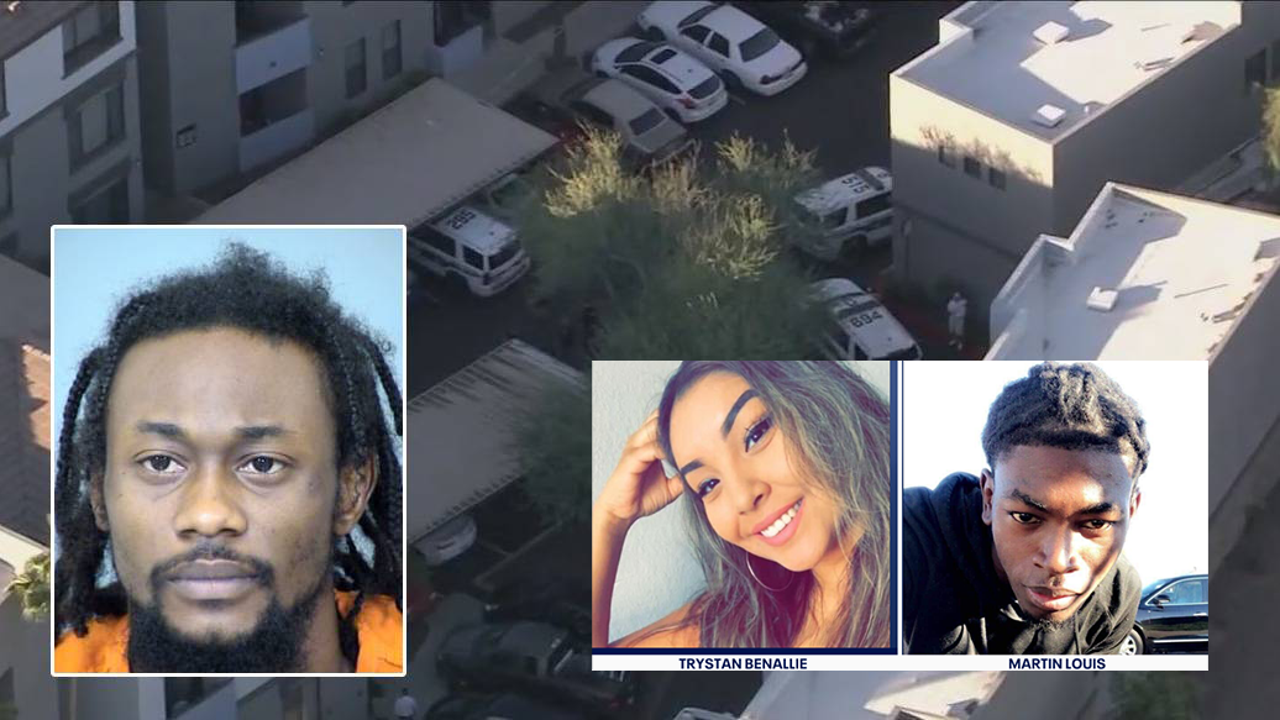 Man, woman found dead in apartment complex in north Phoenix; Suspect Arrested PHOENIX – Police say a suspect was arrested after two people were found shot to death Monday morning in an apartment complex in northern Phoenix. According to a statement by Phoenix Police Sergeant Vincent Cole on the night of November 8, the incident occurred that same morning at an apartment complex near 22nd Street and Beardsley Road. Officials later learned that a man identified as 27-year-old Steven Love-Mason had appeared at the home of 28-year-old Trystan Benallie. Benallie and Love-Mason were previously in a relationship. “Love-Mason asked a neighbor to knock on the door and when it opened he got inside and shot both Benallie and Martin Louis, who were later pronounced deceased,” said Sgt. Cole wrote. Benallie’s child was also in the apartment at the time of the shooting but was not injured. The 2 year old child was five days away from three years old at the time of the shooting. Trystan Benallie and Martin Louis were shot dead in an apartment in northern Phoenix. The suspect, Steven Love-Mason, has been arrested. (Sierre Gamble / Louis family) Louis was identified by the police as a 23-year-old man. Love-Mason fled the area, according to police, and was located by police in Tempe, where he was taken into custody. Love-Mason first appeared in court on Tuesday. According to prosecutors, 13 cartridges were found at the scene and after the shooting, Love-Mason was caught on a surveillance video taking the light rail to his mother’s home, where he was later arrested. “Mr. Love-Mason has a significant criminal history,” said a prosecutor. “He has already been convicted of assault and asphyxiation of another woman on four counts. Prosecutors added that Benallie had filed a protection order against Love-Mason, but it was violated just days after it was served. The police were called, but charges were never brought. According to police, Love-Mason was arrested on October 22nd but released on October 29th, about 10 days before he returned to the apartment complex. Suspect Accused of Killing North Phoenix 2 First Appears in Court “A lot of this stuff isn’t true, I definitely didn’t murder the person I loved,” Love-Mason said. Love-Mason faces two counts of first degree murder, burglary, and aggravated domestic violence. He is held on a $ 2 million bond. Relatives remember victims Family grieves for mother who was shot dead in North Phoenix apartment The victim, identified as 28-year-old Trystan Benallie, was shot dead on the night of November 8th along with a 23-year-old man. Justin Lum from FOX 10 reports. Loved ones remember Benallie while the investigation continues. “She wasn’t afraid to tell me if she was in trouble or needed help or anything. She’s like my best friend,” said Benallie’s sister, Sierre Gamble. Gamble is in excruciating pain. Love-Mason and Benallie have been dating for a few months, according to Gamble. Gamble said Benallie was trying to get away from Love-Mason. “A piece of paper doesn’t do anything. It doesn’t protect you,” Gamble said, referring to the protection order. “I feel so hurt inside. I wish I were there to advise her to get her off this monster, but now life has been taken and her children are now mamalos,” said Benallie’s friend Tiana Yazzie. Gamble is also devastated for the man her sister has just started dating. “He didn’t deserve this,” said Gamble. “He was in the wrong place at the wrong time.” Gamble said Benallie, a mother of five, plans to move out of the apartment soon. “You moved out and it was too late,” said Gamble. “She could have left this apartment and that would never have happened because she had another apartment. She was ready to move there. ”Louis’ family members say they weren’t ready to talk about him on camera, but said he loved making music and making people laugh. An investigation is ongoing. If you have any information, you will be asked to call the Phoenix Police Department at 602-262-6151 or the silent witnesses at 480-WITNESS. Investigation continues after husband and wife were found shot dead in North Phoenix apartment. Steve Nielsen from FOX 10 reports. (Click Here for Benallie’s GoFundMe) (Click Here for Louis’ GoFundMe) More Detective News From Arizona Tune to FOX 10 Phoenix for the Latest News Get the latest news in the FREE FOX 10 News app. Download for Apple iOS or Android.